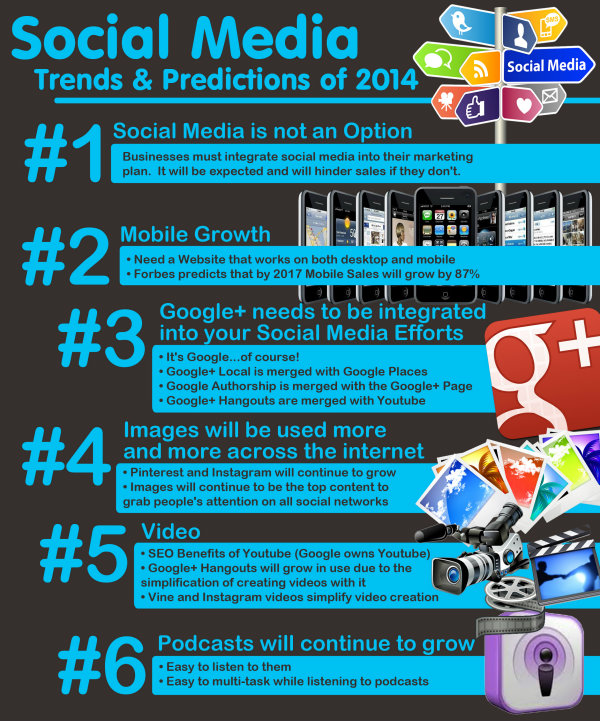 Here is what’s to expect in the New Year:

Big data is the driving force behind a lot of the marketing changes on the horizon. More and more social networks are opening up data to make it easier for social media managers to grasp how their audience is responding to posts. Facebook and Pinterest already make this data available, while other platforms, like Twitter, are slowly rolling out these features. In Twitter’s case, conversion tracking is available for paid advertising only, but it only stands to reason that more social companies will follow the trend and build analytics tools for their users.

Paid-advertising on social media will become a factor in 2014

As social media giants seek to appease shareholders and increase revenue, paid promotion on social media will become more of a necessity, rather than just an added boost. Facebook admitted as much already, revealing that posts are showing up less frequently in people’s timelines. Google+ also recently announced promoted posts. It’s too early to tell, but it would not be surprising to see Google follow the path of Facebook (that is why there is a Google+ in the first place).

To keep up the visibility, marketers will need to learn how to leverage paid promotion, and gauge the effectiveness of each social channel they use. The move to paid social reach will potentially lead marketers to exploring other alternatives.

If you haven’t set up Google Authorship by now you are doing yourself an injustice. Having your picture appear in search increases the click-through rate to your website and helps to add the human touch to search results — but that‘s only part of the benefit. Another aspect of Google+ that makes it so valuable for businesses is that when people have you in their “circles” your posts can potentially show up in their search results. That’s right! When you post something on Google+ that matches a search query done by someone who has you in their circles you will show up on the first page.

Think of the potential: how many people stay logged into their Gmail when they’re online? If you are posting updates relevant to your audience there is a good chance that you will be showing up in their search results. Even if they decide not to click, this is an extraordinary opportunity for exposure and brand recognition.

Still, yet another benefit of Google+ is the communities. Think of them like a forum, filled with people that are gathered around a specific topic. Just a quick search through the many communities will yield you with thousands of potential prospects. And, networking in Google+ communities is great for driving traffic back to your site and increasing your social SEO.

And a few more…